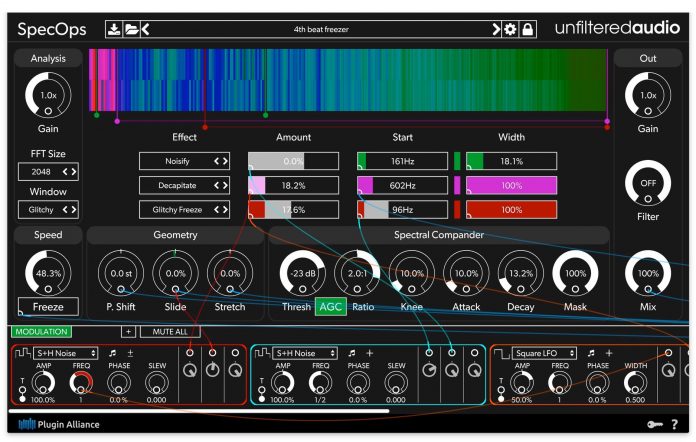 Normal plugins are boring. Unfiltered Audio has brought us incredible plugins such as Fault, giving you endless ways to mangle audio to unrecognizable proportions. Now SpecOps has arrived to push the envelope further.

SANTA CRUZ, CA, USA: Plugin Alliance, a new ‘Über-standard’ supporting all major plugin formats and uniting some of the best-known international audio companies under one virtual roof, is proud to announce availability of SpecOps — extending Californian coding masterminds Unfiltered Audio’s Plugin Alliance partnership with complex and powerful processing packed into an easy-and-fun-to-use plugin possessing 36 diverse and flexible spectral effects, ranging from subtle to extreme, so sound designers and electronic music producers can easily access a multiverse playground of special effects and sweeteners that can deconstruct sounds at the spectral level and reconstruct them in new and exciting ways — as of September 19…
As implied by name, SpecOps allows application of frequency-dependent gain, compression, or distortion to complex sources such as drums or vocals with spectral accuracy and a unique workflow to offer a fresh approach to conventional practices. Putting FFT (Fast Fourier Transform) analysis at its creative heart, the plugin splits audio into hundreds — or even thousands — of frequency slices (or ‘bins’), which can then be manipulated by a slew of onboard spectral effects. End users can select from 36 effects — including more usual suspects (such as Filter, Freeze, and Clip) or from more unique- sounding selections (such as Contrast or Decapitate) — to apply on one of three fully-adjustable bands that can zero in on parts of the source’s spectra at extremely high resolutions. Reality dictates that this can be used to boost/cut, add distortion, or compress with surgical precision — or even dissect and demolish audio parts to create a totally new sound!
Still better, the onboard Spectral Compander compresses or expands per-frequency-slice (per-bin), so dynamics of anywhere between 128 to 32,786 slices (based on the FFT Size setting) are individually analyzed and treated simultaneously! Source- and resolution-dependent dynamics uniquely transform timbres to reveal sonic character that the user never knew was there!
There are also a number of global parameters equally worthy of deeper exploration, including a super-clean Pitch Shifter that goes up or down an octave — great for vocal effects; Speed and Freeze controls that smear and lock SpecOps’ sample analysis, delivering anything from sweet and subtle ambient pad effects to powerful spectral synthesis; and a powerful, 2-pole analog-style lowpass Filter.
Furthermore, Unfiltered Audio’s flagship, freely-assignable MODULATION system sees SpecOps through to a higher state of interaction, including seven built-in modulators — namely, a powerful ,16-step sequencer; input follower; sample and hold noise; four different LFOs (Low Frequency Oscillators); macro control (can be used with any MIDI controller); and a ROLI Lightpad module (for hands-on control courtesy of ROLI’s revolutionary Lightpad Block controller)… all of which can be routed simultaneously to any and all control knobs and sliders, thanks to intuitive drag-and-drop-style ‘cables’ connecting those modulators to almost any parameter.
Put it this way: the applications are truly limitless with SpecOps, spanning moderate processing for music production to severe mangling for sound design. It is truly an interstellar transporter to new worlds in electronic and experimental music, so putting all those creative options into their rightful perspective is an enlightening experience. Tired, static synth pads come alive when modulating the levels, filtering, pitch, noise, or distortion in different frequency bins, creating ever-shifting timbral patterns that user preset libraries could only dream of. Don’t own a synth? Don’t worry. Why not freeze audio on an acoustic instrument track and apply pitch shift to create a spectral synthesizer? Either way, experimental music producers and sound designers can use SpecOps’ train-wrecking effects to brutally transform a hi-hat track into bursts of alien static or make pristine vocal tracks sound like R2D2 with a sore throat! That said, SpecOps is also an industrial music producer’s destructive weapon. Why not modulate a frequency-dependent clipper on an electric bass guitar track to add nasty bottom-end distortion that pulsates perfectly in time to the music’s tempo? Why not, indeed!
Intriguingly, for all its brute strength, SpecOps can conversely be polite — problem-solving to boot. Brittle electric guitar tracks can be warmed up by using the envelope follower to modulate SpecOps’ Reverse algorithm. At the other end of the musical scale, SpecOps can automatically find and attenuate the weakest bass frequencies on a full mix, clarifying and bringing focus to the bottom end. Add more power and punch to mixes while automatically taming unbalanced frequency peaks by using SpecOps’ Spectral Compander to independently compress thousands of frequency bins at once. Or use the spectral lowpass and noise filters along with pitch modulation to temporarily create thin, flanged breakdowns on full mixes to startling effect.
Effectively, then, the choice is in there… just ask Richard Devine, an acclaimed sound designer who has contributed patches for prominent products by a number of notable hardware manufacturers and software developers over the years. After all, his name features prominently amongst the hundreds of out of this world-sounding presets included with SpecOps!

SpecOps is available for purchase — as AAX AudioSuite-, AAX Native-, AU-, VST2-, and VST3-supporting plugin formats for Mac OS X (10.8 through 10.12), Windows (7 through 10), and Pro Tools 10.3.10 (or higher) — exclusively from Plugin Alliance at an introductory promo price of $89.00 USD until October 20, 2017, rising to an MSRP of $129.00 USD thereafter.
Fully-functional, 14-day trials are available to anyone registering for a free Plugin Alliance account here: http://www.plugin-alliance.com/en/registration.html
Note that the proprietary Plugin Alliance Installation Manager means users can select, download, and install only the products and formats needed for their system.
For more in-depth information, including several superb-sounding audio demos, please visit the dedicated SpecOps webpage here: https://www.plugin-alliance.com/en/products/unfiltered_audio_specops.html