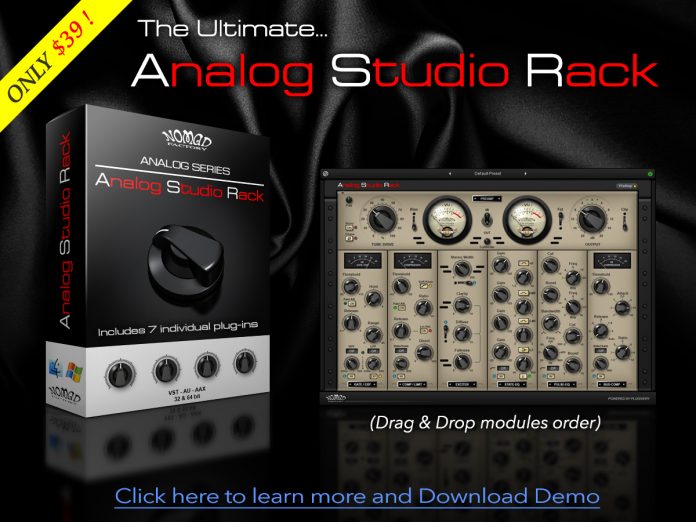 Bernie Torelli was the mastermind and founder of Nomad Factory. Sadly he passed away but the brand lives on with one of his most prized creations he started: Analog Studio Rack.

Today we are very, I mean VERY, VERY, VERY proud and excited to announce the launch of Nomad Factory’s HOT NEW PRODUCT, “Analog Studio Rack”. This one is the third Nomad Factory plug-in launched, since we acquired the brand following Bernie Torelli’s sad passing in January 2016.
Analog Studio Rack was Bernie’s baby and he would have been so proud to see how Plugivery’s young while talented developers managed to solve many technical issues involved in the way this plug-in has been designed.
Bernie initiated the development of Analog Studio Rack over 3 years ago, designing it for his personal use as a professional producer and sound engineer. He wanted something more flexible than the channel strips found on the market to-date, those for most only offer a fixed path structure for each module they contain.
Bernie simply wanted to create the “ULTIMATE ANALOG CHANNEL STRIP PLUG-IN” that can be quickly loaded on any track from voices to bass, drums, keys, percussion or any other instrument, and set-up the pre-amp and modules with the ideal position and signal path for each instrument(s) needs.
The most versatile all-in-one Analog Channel Strip plug-in ever released?
Analog Studio Rack is a “Modular Rack” that provides hot-swappable 500 series style EQ’s, Compressors, Gate, Exciter and a Tube Driven Pre-Amp; the perfect all-in-one channel strip!
Inspired by a classic and famous British console for its Gate/Expander, Comp/Limiter, Bus Compressor and EQ, a modified Exciter, a Tube Driven Pre-Amp and another famous mid 1950’s EQ, the Analog Studio Rack brings together a suite of 7 modules expertly tuned to sound musical. True analog in the box!
Each of the 6 main modules can be placed in any order with simple drag and drop, allowing you the freedom within a rack space design to try different combinations; Compressor before or after EQ, Gate after a crushed Compressor for effect… All of this is now possible to customize your tone and source material, with various views available per module for gain reduction, spectrum and 1/3 octave.
The plug-in comes with an array of presets specifically designed for various instruments as your starting point. Utilize them in your mixes, tweak, create your own as single module presets or global.
Analog Studio Rack ships with 7 individual plug-ins
The Nomad Factory Analog Studio Rack is not only a powerful Modular Rack Plug-in, but a complete bundle that ships with all 7 modules contained in the rack as individual plug-ins. Each plug-ins are also sold separately :
AS – Preamp is your tonal colouration box. Saturate your music, increase the warmth and drive the circuit for some sweet flavors.
AS – Gate Expander, inspired by a famous British console brings the control to your tracks! Slice and dice noise and low-end rumble, and expand your sound so it punches through the mix.
AS – Comp Limit, inspired by a famous British console brings the colored control to your individual tracks.
AS – Exciter, inspired by a classic maximizer you may know, breathes added life to your tracks.
AS – State EQ inspired by a famous British console brings the color of the E and G series to your fingertips.
AS – Pulse EQ, inspired by the classic and famous “Holy Grail” blue hardware rack unit EQ from the mid-50’s brings balanced analog curves to your audio.
AS – Bus Comp, inspired by a famous British console brings the punch and glue to your mixes.

Pricing and Availability
For a limited time, the Analog Studio Rack bundle will be sold at the NO BRAINER price of ONLY $39 (MSRP $199) and each individual modules can be purchased for ONLY $9.99! (MSRP $49)
For more information, visit http://store.dontcrack.com/product_info.php?products_id=2341