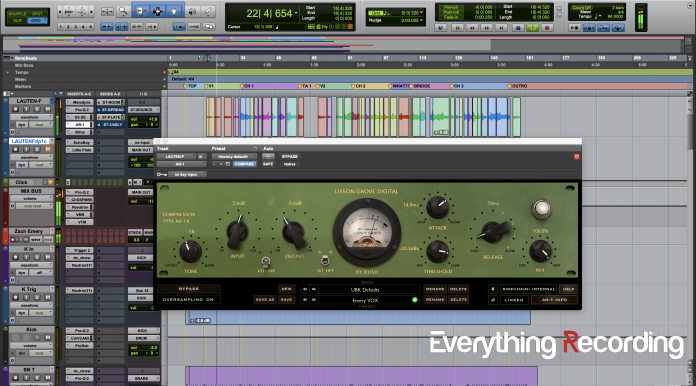 AR-1 Rundown:
5 / 5 Reviewer
Buy: $99.00 (license) 9.99 / month (included in Kush subscription)
Pros
- More fine-tuned controls than traditional tube-based compressor plugins
- Has yet another flavor of UBK overdrive.
- One knob style Tone to refine tracks
Cons
- None, only requests
- Could use a Mid / Side mode
- Needs a Command / Control-click to link input and output
Summary
Are you tired of plugin manufacturers making tube-based compressors with minimal control? You've come to the right place. AR-1 takes the lid off of the classic tube-based compressor with expanded options for compression and tone shaping. All in one plugin.
Rating


Kush takes on a rendition of a classic by releasing a digital version of the Lisson Grove AR-1. This Variable-mu tube compressor is based on a favorite in Abbey Road Studios, making its way onto countless hit records in the ’60s. Kush’s version made its way into Everything Recording’s headquarters before its initial release, and we kick the tires and see just what Kush’s new compressor is about.

After tackling the A-Designs Hammer, I was sure that the next hardware-based plugin was going to be A-Designs’ “The Nail.” Alas, UBK has thwarted predictability and instead recreated a Lisson Grove AR-1. This particular vari-mu compressor is loosely based on another famous compressor from the ’50s. In a way, this makes the Kush version a digital “quasi second cousin” to the RS124. During the ’60s, this modified Altec 436B was one of Abbey Road’s driving forces behind the sound of both the Beatles’ later and Pink Floyd’s earlier records. Being no slouch of its own, the Lisson Grove AR-1 has graced the tracks of some of the Black Keys hits due to its unique brand of tube-based saturation and low end.

Apart from the same military green faceplate, yellow text, and chicken head style knobs, not much remains similar to the hardware model. Overall, the plugin version still features the same Input, Output, Attack, Release, and O/P Load (Tone) knobs. But in typical Kush fashion, each control has been altered to bend to UBK’s will. Even though the plugin slightly differs, Kush maintains that the plugin version is every bit of the hardware counterpart. Featuring the same amount of classic dynamic vibe that made this unit beloved by A-List engineers like Michael Brauer.

Of course, being a Kush Audio plugin version of the hardware has its benefits, packing several enhancements to bring it into the DAW space. To combat the nuisance “pumping” artifacts from low frequencies, the AR-1 incorporates a 6dB-per-octave 60Hz high pass filter to the detector sidechain. The I/O link builds on the concept of the generic relationship of the input and output knobs and incorporates a 2:1 input-output ratio. Since the Kush AR-1 is a 2:1 ratio compressor, this helps to dial in the right amount of gain-staging more effectively than just a linked knob. Basically, for every 2dB of input added or subtracted, 1 dB of output is inversely applied.

Also, instead of merely having the Threshold dependent on the input like the hardware, an additional Threshold control has been added. A bonus to this control is that the compression can bypass by turning the Threshold all the way counter-clockwise. In typical modern fashion, a mix knob has been added as well for quick parallel compression. Lastly, all values display clearly above each control for quick reference.

Instead of the original Input and Output controls only increasing gain, Kush’s version goes from -24dB to +24dB. This increase allows for more control over gain staging and subsequently, the tube overdrive circuit. Combine this with the compressor bypass feature and the Kush Lisson Grove works as a stand-alone distortion box. (If you’ve ever used any of Kush or Sly-Fi’s plugins, you know just how great the overdrives are on UBK’s products).

The AR-1 also shifts the Attack and Release controls for modern applications. The Attack range has moved from the hardware’s 15 – 130ms control to a 1 – 50ms range. While this may seem confusing and limiting, Kush determined there wasn’t much meaningful difference between the 50ms attack time and anything beyond on the compressor’s sound or envelope. This adjustment is due to the incredibly gentle knee and low ratio. What they did determine, however, was that the difference between 1 and 10ms as well as 10 and 50ms was immensely different. Therefore, UBK shifted the attack.

The release, however, has been opened up on the plugin, starting at 50ms and going all the way to 2 seconds (the hardware version starts at 130 and goes to around 1.5 seconds). The plugin has freed the release from the stepped constraints and is now continuously variable, but the original four stepped “Beatles” release times are still accessible by clicking the yellow numbers “1-4” on the release control.

Kush adapted the original Lisson Grove’s “O/P Load” control as well. This control on the hardware changed the output impedance, which if turned counter-clockwise to 200 ohms would result in a darker sound. This “Dark” setting was how the original Altec behaved, but the makers of the Lisson Grove felt that limited its use, so the O/P Load knob was added to give the best of both worlds. The Kush AR-1 took this concept much further (and most likely not possible in hardware)by adding what I can only think to describe as a “tilt/smile” EQ. Turn it counter-clockwise and a low shelf at 80Hz and a high shelf at 8kHz pair with a slight dip at 2.5 kHz. Go clockwise, and the AR-1 incorporates a gentle bump at 150 Hz and 800Hz with a cut at 4 kHz and 10 kHz.

In minimal doses, the “Tone” control can behave like the original, but let’s be honest here, you’re going to be pushing this control. The result, while not corrective per-say, works as a sweetener for just about any type of source audio. Even with compression disabled, the tone control is a must combined with the overdrive the Kush unit produces.

What They Didn’t Include

Kush didn’t incorporate some features like the balance controls due to obvious reasons. A plugin doesn’t need to calibrate any circuits. The missing “Infinite Release” control, however, left me disappointed. Lisson Grove created the Infinite release control to allow the unit to be “primed.” This “preloading” triggers compression at the start of a track. The gain reduction is then “frozen” to avoid that huge sucking sound that comes from the unit initially compressing the audio. The AR-1 mitigates some of these problematic artifacts in the plugin version by giving a quicker attack time. Still, the Infinite Release could have some use in the digital world.

Infinite Hold could be especially useful when using very heavy-handed compression on tracks with long silent parts. Logistically, this may have just been difficult to code. This is by no means a deal breaker. I just found myself curious on the ways I could use this in sessions. Of course, when you see something you don’t have that was originally there, the rebel in you wants it!

Although I’ve never personally used the hardware, Lisson Grove, I like what I hear on the Kush AR-1. It reminds me of a supercharged version of Arturia’s COMP-TUBE-STA with more control over the experience. Where Arturia stuck with the mostly-faithful recreation, UBK took the lid off and went full-on mad scientist. Both accomplish the same overall goal and can handle heaps of gain reduction with an elegant class. The Kush AR-1 can get just as quickly get down and dirty as well.

On acoustic guitar, the AR-1 is precisely the tool I’ve been trying to find. Before the AR-1, I used to have to place several plugins on a track to dial in the right tone. Now I can throw some corrective EQ in front of the AR-1 and let Kush handle the rest. Your bass and synths will love it. This thing can easily handle 20db of gain reduction without thinning out the lows. The “Come Together” preset on drums is a Beatle’s lovers dream. Vocals get a sweet gooey gain reduction that can center a track entirely in the mix. Your mix bus will even love it. Even in small quantities, there is this anchored weight in the mix that wasn’t present without the AR-1.

What I Would’ve Liked to See

While I have no complaints about the plugin, I did find myself wanting a few things. Mid-side capability would be insanely useful given the AR-1’s harmonic distortion and smooth compression. I’d love to be able to distort the edges while slightly squeezing the center of a mix. Lastly, I have the same complaint about the Input / Output link as I do with other plugins. Having an input/output link is useful, but I’d like the ability to “clutch” the linkage with a shortcut key. It just gets tedious having to turn a feature on and off when dialing in the perfect balance.

In typical Kush fashion, they’ve created a plugin that becomes a “quiver of one”. Most developers would separate these features into several plugins to make a few extra bucks. The result of this unit incorporates dynamic control in a way that makes easy-to-use compression accessible to the masses. There isn’t a combination of knobs that makes a bad result, especially using the mix knob. Once understood and gain staged adequately, the sky is the limit.

I’ll admit, I initially reacted with “Kush have already made the Novatron and UBK-1. We don’t need another compressor,”. Despite this initial thought, the AR-1 still impressed. While they have some slight similarities, they’re entirely different units that have their distinctive flavor. The AR-1 removes many restrictions that many vari-mu compression plugins place, giving it a great deal more versatility. Let’s all face it; everyone wants a significant other that can clean up as well as they can get dirty. The Kush AR-1 is the “lady in the streets but a freak in the sheets” of plugin compressors. Enough said.