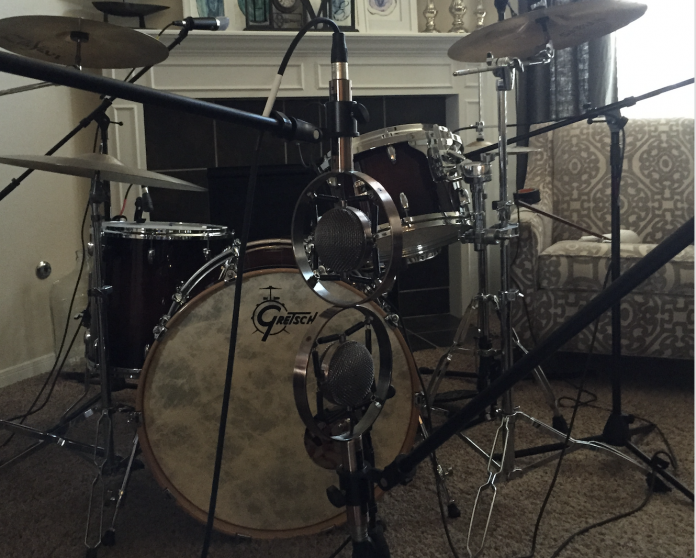 Call it my rogue enthusiasm or hatred for the norm, I got fed up with using the typical SM57 / MD421 amp mic setup. This just happened to be around the time I received a press release for the Cascade Knucklehead ribbon mic. The looks definitely caught my eye first, thus proving my equal love for things functional as well as visually appealing. So I immediately ordered two of these guys with the Lundahl transformer in it. After a shipping mishap and extremely great customer service (as well as a tip about having an AMI transformer version from Langston at JJ Audio), Cascade very graciously repaired the mic and exchanged the Lundahl for the AMI transformer. So now having a Knucklehead with two different transformers, I set out to review these two relatively inexpensive ribbon mics to see if functionality met the already aesthetically pleasing characteristics of this mic.

I had already had a few interactions with this Washington based company by way of the Cascade Elroy. This multipattern tube mic became one of my go-to mics for acoustic guitar, male vocals, room mic, and crazy enough, outside kick drum. What impresses me the most about Cascade is that even through the years of expanding into a major contender in the microphone world, they still have the attitude of a small home-town company. The guys out there really go above and beyond to make you feel like you’re one of their own, even down to buying a replacement cable. I can’t stress enough how great the guys are with any issues that come up along the way, whether it just be a discussion on which transformer to buy or fixing a mic.

So back to the Knucklehead… What you’re basically getting is a short ribbon mic with the same parts as the insanely popular Fathead series, with an suspended headbasket and a very oldschool look. You can read tons of reviews praising the Fat Head series mics, so I’m going to take a different approach on this review. I’m going to try to convince you why you should spring a few extra dollars for the different transformers and this design over the Fat Head series. Not often do I get a product that is so good, that I can review it against itself, so this should be interesting.

To do this, I basically did a shootout of the AMI and Lundahl Transformer as well as borrowed a buddy’s Fat Head II with a stock transformer. Although I placed these mics in just about every application I could think of, I mainly concentrated on the common uses and used each as guitar amp mics and overhead and room mics for drums and acoustic instruments. Lets start with the Knucklehead’s design functionality versus the Fat Head.
If you were going on looks alone, there’s no contest. The Knucklehead always catches the eye of clients and my friends, even to the point of them just wanting to use it based on the overall classic looking vibe.

The design of the Knucklehead comes from some of the very early mics like the one in the King’s Speech with the headbasket protected by its own internal shockmount system. This adds a built in fail-safe for the unexpected. Although it’s a little bigger in size, the Knucklehead fits in the same spaces as the Fat Head with ease. It’s definitely one I grab to use on guitar cabinets because the body of the mic is so minimal that it doesn’t get in the way of itself. One of the benefits of the shockmount ring is that it can be used to easily get the 90? offset in Blumlein Array recording. With the rings perpendicular to each other, you can clearly set your offset without guessing. Also, having the ring around the headbasket makes for a nice way to center your “Mid” mic in a “Mid-Side” setup. While the ring sometimes got in the way of getting other mics close for shootout purposes, the ring does more good than harm and can very quickly become a helpful tool.

While the stock transformer performed exceptionally great in the Fat Head II, I found that the aftermarket transformers added a distinct character that added some pleasing coloration to the signal. Given the stark transparency of digital recording, the AMI and Lundahl gave it a metaphorical “Instagram filter” to the track, making it sound more classic while still fitting in with modern music. After using all 3 mics on 3 days worth of sessions, I already found myself reaching for one mic in particular for guitar cabinets and another for overhead and room miking.

Stock Transformer Fat Head II:
This mic seemed to be ideal for overhead mics on drums. Seeing as I do alot of cutting of the low end on these tracks, I found that I even liked them as much if not more than my small diaphragm condenser mics because they do pick up a bit more open sound in the cymbals that I could use to give that added boost to the other drum mics. The stock transformer also made it easier to cut frequencies and set in the mix a little better than the AMI and Lundahl. I found that they have a bit more low end and even after hi-pass filtering, still colored the signal a bit too much. I actually liked this mic right off the pre-amp for heavier guitars as well.

Lundahl Transformer Knucklehead:
This was my mic that I found myself using more for Room mics for drums and Overdriven guitar. The Lundahl has a very nice warmth without sacrificing too much highs in miking overdriven to distorted guitar. Getting alot of mud from ribbons is a common issue especially with blues and rock guitarist, but the Lundahl knew its place. You had to point it more to the center of the cone to bring out the brightness but even if you’re using the old faithful 57, this mic compliments it very well with added beef and warmth to the track.

AMI Transformer Knucklehead:
I found myself loving this mic on all things electric guitar. This mic has a significant amount of low end warmth and with some slight EQ can be tamed into perfect clean guitar tracks. It handles distortion fairly well but it comes through in spades with a bluesy clean/breakover lead. I was recording a blues artist and kept muting my other channels on his leads and using this one exclusively. It also was a very good close room mic for drums. The increased low end response will warm up the overall sound of a drum track, giving it that “When the Levee Breaks” type sound every drummer dreams of.

So if I had to pick one, what would I use? I know a lot of people go straight to the Lundahl because of its name recognition and classic sound but I would have to say the AMI Transformer. I found myself using it in more instances than all the others. Don’t get me wrong, the other two will work great in any application but the AMI just had the character I wanted especially on guitars. In the overall scheme of things, the AMI just has a slight more appealing presence, almost enough that I could guess it with my eyes closed. Although the increased warmth may need to be tamed with EQ is some situations, I preferred to deal with it. I really think Cascade should push the AMI just as much if not more than the Lundahl on their site. I honestly didn’t know they had the option until I got the tip from JJ Audio. Before I bought these mics, I was strongly considering getting a Royer R-101, but now I feel it would be a waste of money. When you got a great thing at a fraction of the cost, why rock the boat?

So in conclusion I’ve found a couple of Ribbon mics that have taken someone who is an impulsive spender and loves to collect gear, and made him content with what he has to the point that he’s not really shopping for any other ribbon mics. If you don’t believe me, you can ask my future wife about my spending problem.
For more info on these incredible mics, click HERE