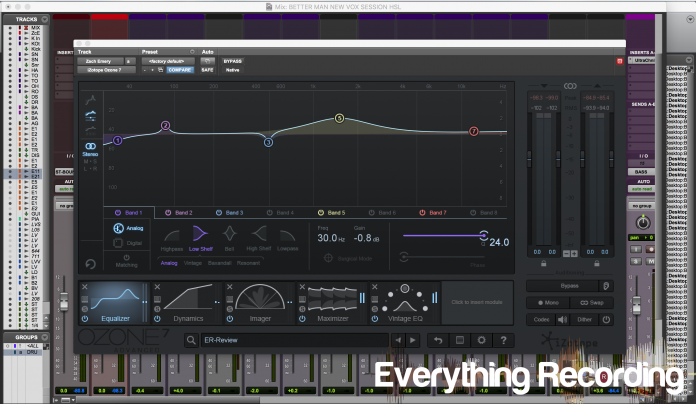 For years, iZotope has revolutionized home mastering with Ozone. Version 7 has handed more tools over to the user to make home mastering as intuitive and easy as possible. Just like before, Ozone is split into two versions: Standard and Advanced. Standard will give you access to the most used portions of the suite plus a new Vintage Limiter, updated Maximizer with IRC IV, and MP3/AAC export. Advanced incorporates all of the same features as Standard but also ads component plugins for 10 modules, Codec preview, the Insight Metering Plugin, and even 3 all new plugins which will be discussed later. Standard weighs in at $249 while Advanced is $499 – Yes there is a big difference in price but the features in Advanced make the suite almost a whole different program in its own right. Since Ozone is such a massive suite and there are already numerous reviews of the entire program, this review will focus on the new features to see if the jump from version 6 is worth the cash.
Let it be known from the start that Ozone is not the most CPU friendly software suite. iZotope has made it known that quality takes priority over efficiency. As frustrating as it is to push your DAW or Standalone version of Ozone to the point of overload, a listener does not care about your woes. They just want to hear the best version possible and it is actually commendable that even though a software company strives to be CPU conscious, they will always let quality dictate the end product. Just pull a few of those other plugins off the mix or print some tracks with processing and you’ll be fine. Now that we have the disclaimer on the CPU usage out of the way let’s start with the new features that come standard on both versions.
New Features for Standard and Advanced:
Maximizer:
The Maximizer section of Ozone is the bread and butter of the suite. This digital peak limiter incorporates Ozone’s award winning IRC (Intelligent Release Control) to give optimal loudness without the artifacts. For version 7 a new IRC standard has been added with IRC IV. This IRC incorporates dozens of bands that limit only based on the material in each section. When peaks come across one section, the limiter only acts in that section, thus taming the part that needs it the most, while leaving the rest untouched. This essentially is smarter multiband dynamics on autopilot, taking the guesswork out of the equation and handling the heavy lifting on its own. IRC IV features 3 styles that cater specifically to the limiting needed for the track: Classic, Modern, and Transient. Classic is a broader adjustment over the whole spectrum, Modern is more precise and transparent, and Transient saves those peaks, while adding more transparency without flattening your waveform. Each IRC within the Maximizer strives to bring the levels up in mixes all while keeping the pumping and distortion artifacts to a minimum.

Vintage Limiter:
The Vintage Limiter is actually spun off from the Maximizer’s “Tube Mode” but was so useful, it was made into its own module. The Vintage Limiter is also somewhat based off the Fairchild 670 Limiter from the days of yore with its soft knee and gentle musical response to material. This Limiter warms up material all while incorporating Maximizer’s IRC I to prevent clipping, all while bringing up the level of the source material. If this weren’t already useful in itself, iZotope has made 3 modes within the Vintage Limiter. Each of these modes feature custom attack and release times paired with some iZotope magic to add different flavors of old school goodness to a track.

Analog Mode features fast attack with a variable release to thicken up the low end while smoothing out the rest of the spectrum. This mode is perfect to provide just a little more thump to the chest without mudding up your low end.
Tube Mode gives variable attack and release to sweeten up the entire frequency spectrum without being too heavy handed. The enhancement is audible throughout your lows, mids, and highs, all while preventing clipping.
Modern Mode takes features from both Analog and Tube mode to both handle the surgical, all while sweetening the entire spectrum and allowing the transients to stick out in the mix.
The Vintage Limiter is great for situations where levels need to be brought up with style. The gentle characteristics of this limiter allow for a little more leeway in transients, all while controlling dynamics in the way only a true veteran processor can.
Added Export Modes:
The last new feature that comes standard in both versions of Ozone 7 is the added export formats. Not only can you simply export WAV files with Ozone, but with version 7 there are no need for external programs to create an MP3 or AAC with metadata.
New Features for Advanced Only:
As if Standard didn’t come with enough new features, Advanced brings a proverbial arsenal to the battlefield in the form of enhancements, unlocked features, and even new modules. Each module can be instantiated as its own plugin without using the Ozone plugin in your DAW, thus expanding the tools for easier use on mix buss processing. Advanced even comes standard with Insight which is $499 on its own, thus making the jump a no brainer. If that weren’t enough, Advanced features 3 all new modules with Vintage Tape, Vintage EQ, and Vintage Compressor.
Insight:
Insight packs so many metering functions that a full review of features deserves its own review, but in essence, Insight provides in depth metering with a slew of graphs that cover loudness history, spectrum analysis, sound field, phase correlation, and more. Insight provides multiple graphs of monitoring each of these metering types in both stereo and surround forms. This metering suite will ensure that loudness standards are met for a variety of broadcast formats, saving the guesswork for the birds.
The three new modules bring all new versions of dynamics, sonic enhancement, and EQ with the Vintage Compressor, Vintage Tape, and Vintage EQ.

Vintage Compressor:
Vintage Compressor is actually not based on one piece of hardware: it’s based on the best parts of all of them. This compressor is actually a feedback compressor, meaning that detection for dynamics control is monitored on the way out, not on the way in like most software compressors. This is actually very difficult to create in the digital domain due to translation of analog topology to 1’s and 0’s. This type of compressor creates a very unique dynamics control that uses program dependent attack and release. Essentially the release will be much longer during sustained content and quicker for shorter transients. This helps avoid the pumping artifacts created by other types of compressors. The detection filter can also be controlled by the user with various high pass, peaking, and shelving filters. Like most other modules within Ozone, the buck doesn’t just stop with the main module. The Vintage Compressor contains 3 modes to further tailor dynamics control to meet the needs of your content.
Sharp Mode allows the transients to pass though while controlling the rest of the content.
Balance Mode handles it all while controlling peaks without smashing them and enhancing the quieter parts.
Smooth Mode does just that by softening peaks and bringing up the quieter parts to add density to the mix.
Vintage Compressor also features automatic gain compensation to keep the track as close to the original level for easier comparison.
Vintage Tape:
Vintage Tape brings the subtle saturation and transient smoothing characteristics to your masters, basing the model off of the Studer A810 two track tape machine, all without the headache and unwanted noise that comes with reel to reel. This module allows for control of the drive into the machine, Bias, Tape Speed, Harmonics, and Emphasis, giving all the features needed to add the color only running tracks through tape can give. The Harmonics can even be tweaked to add odd or even distortion into the track for a highly customizable palette. Vintage Tape also features both 15 and 30ips modes to add the low end of 15ips or the crispness of 30ips to mixes.
Vintage EQ:
Vintage EQ is based off of the Pultec EQP-1A and MEQ-5, thus bringing both of these pieces of gear into one window for ease of use as well as vintage flavor. Vintage EQ features the exact same knobs as the originals, giving the ability to boost and attenuate the same frequency for that prized Pultec tone. The frequencies come in the same set frequency switches to control the lows and highs of the EQP-1A and the mid-section with the MEQ-5.
Codec Preview:
With so many different formats of audio across so many mediums, final masters have to be checked across all of them. Codec preview brings many of these in one window by allowing the engineer to hear what the mix will sound like on various streaming sites at different bit rates. This takes the guesswork out of wondering what Youtube or Apple music is going to do to the master by giving selectable formats and bitrates for preview in Ozone.
Summary:
In conclusion, it’s pretty clear that Ozone 7 delivers the justification needed to convince your significant other of the purchase. He or she may not understand all of the new features, but the sheer amount will either justify the purchase or overload them so much technical speak, it will force them into submission (Thanks iZotope!). Each of the new modules didn’t feel like recycled features already within the plugin and offered new enhancements to both mastering and mixing. Many of these modules have ended up on various mix busses via the individual component plugins offered in Advanced. The metering section helped find issues in the mix that I couldn’t quite put my finger on audibly, and the updated look of the interface provided a non-biased analysis of the impact each module made. Let’s be honest, sometimes the actual look of a plugin can sway your opinion of it but iZotope’s sleek look still provides ease of use without dulling the senses with un-needed visuals some other flashy plugin designers use (I don’t need a light show to prove I’m compressing properly). I’d say Ozone 7 is a no brainer for the home Mastering Engineer, Mix Engineer, and the A List Engineer alike. Bravo iZotope!
For more information and to purchase, visit https://www.izotope.com/en/store.html