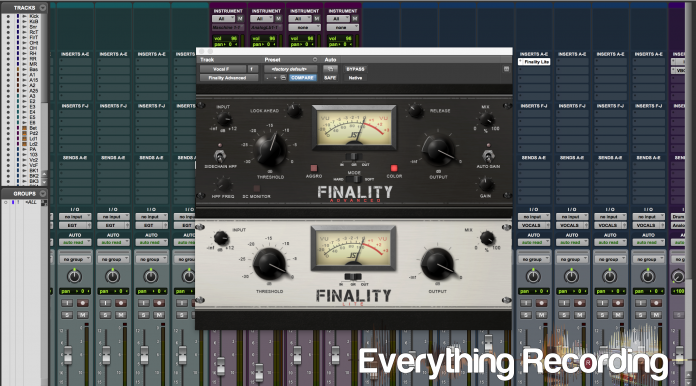 A while back, Everything Recording reviewed Joey Sturgis Tone: Toneforge Menace (Review HERE) and we mentioned how we would love to see the channel strip section of the guitar amp modeling plugin able to be used standalone. Everything Recording is pleased to say we got half of our wish (we’re still hoping for the EQ section as well) with the Finality Series Limiter. Actually we got a little more than we wanted in a whole new algorithm complete with more features and versatility.

Finality comes in two versions- the Lite version which features pretty much the same controls as the limiter in the Toneforge Menace and an advanced version with more control over the experience. This plugin is available in VST2/3, AAX, and AU formats and as always with JST products, is DRM free (he trusts you with the software so don’t screw it up) meaning you do not have to go through the whole dongle, registration song and dance. Install is a breeze and the user manual is located in the application folder for easy access.

Finality Lite is somewhat similar in look and function to an LA2A, except with a few more added features. On the top left is an input knob which allows for driving the input signal into the gain reduction stage for more aggressive limiting. On the top right is a mix knob to control just how much limiting you would like in a track of bus. Other than those two buttons, you have a threshold, meter style switch, and output gain knob. The rest of the limiting stage is taken care of by Mr Sturgis’ own custom attack and release settings, but if you would like access to more under the hood, the advanced version may be more suited for you.

Finality Advanced takes the exact same features as Lite and adds an onslaught of controls. In addition to the input gain stage, mix knob, threshold, and output you are given a complete side-chain section, look-ahead, an additional gain trim knob, and a few special switches and buttons. The side-chain section houses a switch to turn it on, frequency selector that goes all the way to 12kHz and an SC Monitor that allows you to hear just what frequencies will trigger the limiting. The look-ahead is useful in catching quick transients by scanning ahead of the audio up to 5 milliseconds. In the middle section sits an “Aggro” button which tailors the release stage to fit faster peaking material, a hard and soft mode, which also changes the release behavior, and a “Color” button to inject subtle distortion into the signal. The Color button’s affect can be heard by lowering the threshold and makes for a very characteristic limiting. Finally, the Auto Gain works to bring the overall volume of the track to an optimum level based on the amount of gain reduction taking place.
Overall, this Limiter gives out versatile results, providing either pristine or vintage limiting with a vibe. Transient heavy content is handled great by its “Aggro” knob and I found myself using this just as much as a dynamics tool as a “tone” tool. The hard and soft settings provide audible differences in limiting type and are a must have in adding different characteristics to tracks. The sky is the limit with this plugin. At a $90.00 for Advanced, you are getting a steal for the features and sound of this limiter. If you’re not into many controls and just want easy limiting, the lite version does the trick excellently and is just $30 cheaper. Honestly, just spring for the Advanced and have both plugins, one for when you just need a quick tool with lite, and Advanced when you need to be surgical.

The only issue I really have is in the metering. Finality features Input, Output, and Gain Reduction Limiting, but in the version at the time of review, the Input and Output only seem to register the initial transient, then fall back down to the bottom of the meter. The gain reduction portion works great which is what is usually used so this is a mere speed bump in an otherwise fantastic plugin. I believe this issue has been addressed and will be resolved in a future update. I’d also like a few custom Joey Sturgis presets as well. Other than that, Finality is one of those plugins you could use in a “Desert Island” situation due to its dynamic and tone shaping abilities. Give me a stock EQ and I could mix albums with it.
For more information and to purchase, click HERE.

Kush and Relab Team Up for Goldplate Reverb