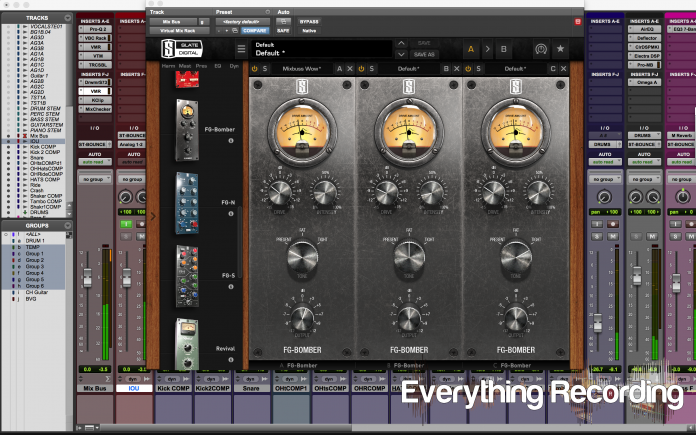 Most Slate Digital plugins are modeled after specific pieces of gear, but recently, originals such as the Custom Series EQ and Tilt EQ (Review Here) have made their way into the mix. The Bomber is another original concoction from Steven Slate. According to Slate, this dynamic enhancing tool takes all of the experience they have learned from modeling famous gear and places it in one easy to use dynamics enhancer. This module is part of the Virtual Mix Rack (Review Here), a 500 series type plugin rack that houses many of Slate’s new creations.

The controls are fairly straight-forward. “Drive” controls how hard you are pushing the content into the processor, “Intensity” is essentially a Wet / Dry knob, the “Tone” knob has three settings that describe the type of sound the processor is going for, and the “Output” does what all output knobs do. The metering also features a section with a “bomb” icon on it. This is the area Slate considers the “sweet spot” for the optimal transient affected signal. Get the audio there, the processor does the rest. Seems pretty basic right? It’s what’s going on behind the curtain that has people baffled.

The first thing that needs to be stated – discretion is key in using this processor because things can get squirrelly really fast. Too much of this plugin results in a pumping, breathing monster of its own; which if that’s the sound that is desired, can come in handy. A little bit goes a long way, but this approach of allowing you to hear the extremes actually can come in handy. By hearing the far most outreaches of the FG-Bomber, one can hear exactly what areas the processor is affecting and scale back to a more subtle level. It seems that the processor works best with the “Intensity” well under 50% once the drive is placed around the “bomb”. This isn’t to say always hit this mark on the processor. Sometimes pushing the source far beyond the bomb will increase the amount of sustain in audio; going short of the bomb will enhance the transients more.

At first it does seem a little tough to tweak. Usually the result is either too subtle or too much. This is where the presets come in handy. The thing about these controls is that small adjustments between the “Drive” and “Intensity” can completely change the sound. One really has to get to know Bomber before the “magic” happens. Sure, good results can be had off the bat, but like most plugins, heavy handed use results and ear fatigue can get the best of an engineer. That being understood, let’s take a look at the three different “Tone” controls.
Present has a very strong focus on the mids, perfect for pushing a slightly buried vocal track forward. “Fat” and “Tight” take on the lower end of the spectrum by adding weight to a mix with “Fat” and punch with “Tight”. What all is going on behind the scenes can be a little confusing but it is assumed quite a bit of parallel processing, filtering, saturation, combined with dynamics are at play.

Even though the plugin is featured more for instrument or mix busses, Bomber can be used as both a slight enhance as well as an effect all its own. Place it on a kick or snare track to allow it to poke through a mix, run it heavy handed on a synth or drum loop to give a little pumping, or just place it on the mix buss subtly to get a little dimension. Multiple instances could even be used in tandem to draw out just the right amount of each tone. This becomes a balancing act that can easily get out of hand if not dialed way back. Overall this plugin can be just what a mix needs when used in the right context.

Personally I enjoyed using the plugin. It wasn’t necessarily ideal on everything but when it worked, I knew it instantly. The scaled back controls make decisions slightly easier. When it all boils down to it, FG-Bomber is good at what it does in the right dosage. For the price it is a great tool to have in the arsenal, especially when you need the mix to jump out and inspire. I used it quite a bit early on when tracking to make production decisions and make rough mixes jump out of the speakers a little. I love the ease of use and the convenience of throwing it in with a rack I’m already most likely using on busses, especially with VCC.

Don’t let the small, easy interface fool you into thinking this is just another “fast food processor” (gotta love the rhetoric on forums). FG-Bomber has a specific purpose and when wielded correctly, has incredible results. Go grab a trial and see what impact Bomber has on your mix.
For more information, visit http://www.slatedigital.com/products/fg-bomber/