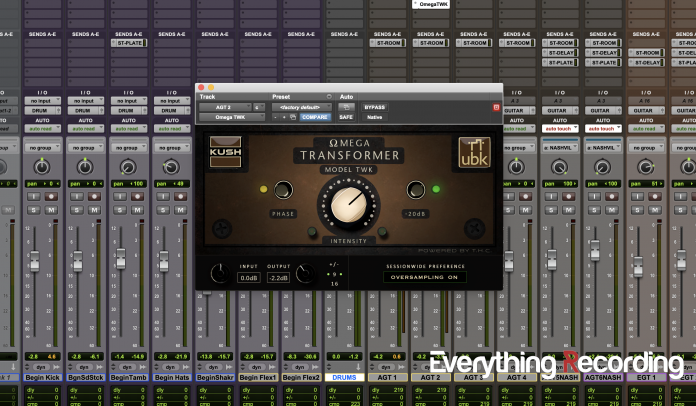 Omega Series TWK Rundown:
5 / 5 Reviewer
Price: $29.00 (or have all Kush plugins for $9.99 / month)
Pros
- Sounds great on anything
- Insane value for money
- Fills the transistor gap in the Omega Transformer Plugin Series
Cons
- No cons really
- Initial default state of plugin adds volume to source audio and has to be dialed in a little with the input and output level knobs
Summary
Vibe is everything on a song. This plugin has vibe for days. You honestly can't own enough dirt boxes and for this price, it's a no-brainer.
Rating

It’s a cold day over here in Houston, well, cold for us. Either way, we could use some warmth. Luckily the great folks over at Kush Audio have released just that for your audio. Behold, the latest in the Omega Series Transformer plugins, the Omega TWK. While the previous iterations of the Omega series dealt with tubes and transformers, the TWK ventures into the world of transistors, modeling the heart of Kush’s very own Tweaker hardware compressor. Let’s look at UBK’s description to see what’s under TWK’s hood since my explanation would not be near as entertaining to read.

From the Man Himself

Omega Model TWK is a lovely saturation and distortion generator pulled straight from  the heart of Kush’s own Tweaker hardware compressor, and represents our first foray  into modeling solid state distortion (as opposed to tubes and/or transformers).

Model TWK’s dirt is the cumulative result of modeling the way Tweaker overdrives a  long chain of 70’s op­-amps, all of which have specs such as slew rate and IMD that, by  modern standards, are considered abysmal.  But that abysmally dirty, slow sound is  exactly what makes the Tweaker such a warm, charming friend to all kinds of sounds.   And at the heart of Tweaker’s op­amp chain is another friend of distortion lovers  everywhere, the inimitable ‘supermatched transistor’, itself a primitive and imperfect  attempt to perfectly balance the push and pull of a primitive VCA.

The net effect of lightly grinding each of those clipping stages before passing it along to  the next is an incredibly smooth, thick, and slightly dark saturation.  And because it’s the result of a proverbial ‘house of cards’ in terms of gain staging, Model TWK (like the  Tweaker itself) goes from ‘mellow and sweet’ to ‘angry and abrasive’ quite a bit faster  than the other Omega Transformers, with their more forgiving, discrete tubes­-and-­iron  circuitry.

For those of you who are not familiar, these plugins are very minimal in controls. The “Intensity” knob in the middle controls how much influence the Omega Transformer will have on the source audio. Next, we have Phase, a -20dB pad, and to round it off, input and output level knobs. Oversampling for all plugins in the session can also be controlled via the box on the bottom right.

I have to go on a slight tangent at this point because I would be short-changing you if I didn’t explain this. While these plugins are designed to work together with the Omega 500 series preamp (review HERE), you don’t have to own an Omega 500 to reap the benefits of this plugin. Having said that, as impressive as these Transformer plugins are on audio recorded on other gear, you’re barely scratching the surface until you track the audio through an Omega 500. I go into more detail in the Omega review linked above, but in short, the Omega 500 was built to feed audio to these plugins to get the best result. Sure, a Ferrari can run on 87 Octane fuel, but it’s not going to run like it would with premium fuel. These plugins are no different.

So how does the Omega Model TWK sound? Well, taking Gregory Scott’s advice, the first place I put it was the mix buss. After level matching with the bypassed audio and pushing the intensity to the point where it barely flickers, a warm hue blankets the track. Dialed back, it’s minimally intrusive but vibey — sort of like putting on an amber-tinted sunglasses on a bright day. While subtle is ideal on the mix bus, I found other areas to open the throttle.

Kick drums will love TWK. I duplicated the kick track, pushed TWK reasonably hard, and blended it with the original. The result is just what you need to get a kick drum out in front of a more aggressive track. If more mellow is what you need, the -20dB pad is perfect, giving off a more nasty knock. Even though the kick loved this transformer, I found another instrument that likes it even more.

The Omega Model TWK was BUILT for Acoustic guitars. This plugin adds another layer of foundation to an instrument that can either take up too much space or get washed out and this. I had two go-to dirt plugins I would regularly use on acoustic guitars. I won’t even mention them as alternatives because both of them lacked the indefinable quality TWK has. While very close, there’s just a little magic in how this plugin handles the overtones of an acoustic guitar.

As far as drawbacks, there isn’t any. The only quirk I found was as soon as you instantiate the TWK, the volume of your track goes up noticeably. To remedy this, you have to work the input, output, and bypass knobs to get a level-matched comparison. Other than that, there isn’t a single track that couldn’t benefit from Omega TWK in some capacity. It’s one of my favorites, right up there with the 458A.