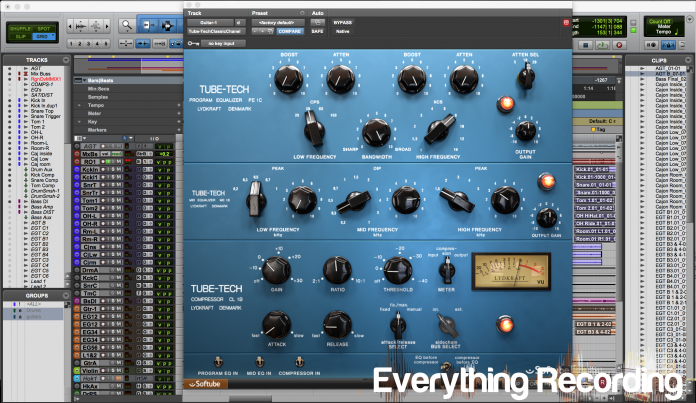 You’ve requested it, you got it! Recently, the website’s analytics were finally checked by yours truly and I found that both the Softube TSAR and Tube-Tech Classic Channel had been heavily searched for under the sites posts. Well a couple of weeks ago the review on TSAR-1 / 1R was finished and now we’re onto the Classic Channel. Even though the Softube rendition of the three pieces of Tube Tech gear has been out for quite some time, the searches still come in. So late to the party or not, here we go.

Pultec gear is emulated the world over by tons of manufacturers in both the hardware and software realm. Although there are many ways to get the classic Pultec sound, Tube-Tech has been at the top of this market since the mid 80’s. Not only is Tube-Tech a staple in this field, but they also have a huge name in their own right with countless versions of preamps, compressors, and EQs. Softube saw this as the perfect opportunity to kill two birds with one stone and model classic gear as well as a modern masterpiece.

While these plugins are available as to purchase separately, Softube has packaged them together; not only saving you $220.00 overall, but also placing them in one plugin window that has a few tricks up its sleeve. If the one window takes up too much screen space, Softube allows you to run each plugin separately. As with everything Softube, it comes in all varieties of versions (AAX, AU, VST) in one nice installer and requires a iLok account (which is free) and the License Manager installed on the working computer. Softube has even given you the option of placing the installer in two places, both on the actual computer and on an iLok USB for portable use.

So why put down $450 on 3 plugins? Well, steep price of not, Tube-Tech is very particular with who they let inside the inner circle. So much to the point that Softube was up against some serious companies for the bid to make this plugin. Clearly Tube-Tech held whatever company threw their hat in the ring to the highest standards and Softube met them with gusto. This was no easy task and Softube worked tirelessly to ensure the software version matched every nuance, personality, and even wording on the user interface of the hardware counterpart. What rose from the ashes are 3 plugins that separately made their debut; but Softube, in their ever improving style packaged them in one window for quick and easy use.

What you get is the Tube-Tech PE1C “Pultec EQ”, the Tube-Tech ME1B Mid Range EQ, and the infamous Tube-Tech CL1B Compressor. Even though each plugin’s name explains its use, just in case there are some newcomers, we will go over each plugin in detail.

The Tube-Tech PE1C is responsible for the perfect EQ “smile” (i.e. bass and treble boosts) in countless songs. This hardware unit handles those two facets of EQ solely and powerfully with a sound all its own. Don’t let the CPS and KCS confuse you too much. True to the real hardware unit, the PE1C maintains the “cycles per second” and “kilocycles per second” nomenclature used originally. (This essentially is Hz and kHz.) Once that is realized, the interface is very simple. You have a knob for boost, a knob to cut, and a selector switch to pick your frequency. In the center, you have your bandwidth control and on the far right sits your attenuation frequency selector. An optional added output gain will help drive or cut the audio signal out to the compressor. If you prefer the fancy way of bypassing the plugin, simply click the light in between the “Atten Sel” and “Output” knob. For those who are unfamiliar, the PE1C incorporates a separate boost and attenuate knobs due to the iconic sound it gives to the audio signal. Both boosting and attenuating around the low frequency at the same time produces a sound all its own to this unit. Also, having the option to pick which high frequency to cut with the attenuate allows for the frequency you are boosting to stand out in ways other EQs just can’t quite accomplish.

In order to wrangle in the mids, Softube developed the ME1B. This unit is a little different, even down to sporting the kHz instead of the CPS and KCS controls that the PE1C sports. This unit also only either features a peak or a dip alone for each of the 3 overlapping bands it supplies. The “Low Frequency” handles a great deal of the low to low-mid spectrum all the way from 0.2 (200Hz) to 1kHz. This band can only boost these frequencies. The “Mid Frequency” is a cut only filter, allowing you to “dip” anywhere from 0.2 (200Hz) all the way to 7kHz. Lastly the “High Frequency” gives another boost from 1.5kHz to 5kHz. This is a perfect companion to the PE1C by adding the extra boost where you need it and the dip to clean up everything in the middle. Like the PE1C, the ME1B features and output gain that can either boost or cut the output level.

Now what classic set of EQ would be complete without some dynamics control? Not just any compressor is worthy to sit in a signal chain with these two legends, but the CL1B pulls its weight in spades. The hardware version is a tool that not only tames the transient; it harnesses them with style, like a bullfighter. This is a tool used so widely across all genres that even Kanye West attached his name as a user of this tool. Naturally Softube knew they wanted this compressor in the Classic Channel and thus the CL1B was coded. What sets the CL1B apart from other compressors is the “Attack/Release” Selector switch. Set in the “Manual.” Mode, this compressor’s attack and release settings work just as any other compressor, giving you independent interaction between the two settings. The “fixed” setting automatically selects a 1ms attack and 50ms release. The magic starts happening when you select the “fix/man” setting. With this setting, the attack is set to 1ms like the “fixed” setting but the release is multistage. Until the peak of the transient disappears, the release of this setting is fast, but as the peak disappears, the second stage of the release kicks in depending on your release setting. This works almost as a “hold” setting for the release, allowing for a more prominent initial transient, while still maintaining a clean program dependent release. Other than the variable attack and release, the rest of the controls are very straightforward. You are also given the choice of a sidechain select and the option of monitoring your input, output, or compression metering.

While each of these plugins is useful in their own right, Softube saw an opportunity to have them join forces in one window. Thus the Tube-Tech Classic Channel was born. This rack style interface gives you all three plugins in one window at your disposal. Each plugin can be enabled or disabled by either the dipswitches across the bottom, or by clicking the glowing power lights on each interface. This way, you can pick to use all three or any combination in between. Once a plugin is disabled in the window, it will free up all to precious processing power as well, so if the light is off on the particular plugin, it’s not using precious resources. On top of giving you the option to choose between which plugins to use, you are also given the ability to control how they are used. On the bottom right of the rack you will see a switch that will either control EQ going before Compression or vice versa. Although I love the option, I wish the plugin window would reorganize to represent the signal chain order, similar to Slate Virtual Mix Rack. I also wish that as a dipswitch is turned off for the plugins that are not in use, that the plugin window would shrink or expand. It’s great having the option to use all three, but not having the ability to scale down can take up quite a bit of space. The work around for this is to just use the plugins wanted in separate inserts, but that has a few foibles in design as well.

The first one is in the preset execution. Let’s say you are working in the Classic Channel and decide you just want the CL1B. You save a preset in the rack and open the CL1B plugin alone. When you go to look for the preset, it’s nowhere to be found. So naturally you open the window for your Classic Channel and try to match the compression settings and you notice the numbering scheme per plugin is slightly different with the single plugin version showing whole numbers and the channel version showing decimal numbers. Also the Tube-Tech Classic Channel’s values at the bottom of the screen go over three decimal places while the single plugin only goes one decimal place. While having the knobs match up in the same position makes getting the preset matched fairly easy, it still would be nice for matching number values, especially with the new standard of having more decimal places. I stated this before in the TSAR-1 review and I’ll say it again. Softube would really benefit from following suit of other plugin developers and coding their own preset menu. This would allow the Tube-Tech Classic Channel’s presets to transfer to single plugins. The slightly varying attack and release number scheme across the Classic Channel and single CL1B plugin is probably a bug in the software that could be easily fixed and just needs to be addressed.

So does the functionality get in the way of the plugin use and quality? Not even close. I absolutely love these plugins. Even pitted against other Pultec plugin models, the PE1C is immensely different. The highs are smoother, the lows more solid. These EQs just work. And I wouldn’t care if the CL1B verbally assaulted me each time I adjusted a knob much less not match the number scheme from the rack model to the single model, I’d still use it on every vocal and guitar track I possibly could. Softube truly hit a home run and picked three incredible hardware units to model. As much as I had issues here and there with the rack, I love having the option to free up precious inserts with 3 plugins in one window. The ability to switch between EQ before or after compression saves having to drag inserts around and even though it takes up a lot of screen space when you only end up using one or two plugins, you still save DSP.

So yes, this is a decent amount of money to spend on plugins, but who can put a true price on convenience, sound quality, and functionality? To be honest, in comparison with other plugins of the same caliber, Classic Channel actually comes in cheaper than most. Softube has once again truly created a great one-two punch for your mixes.
For more info, and to purchase, visit http://www.softube.com/index.php?id=cc