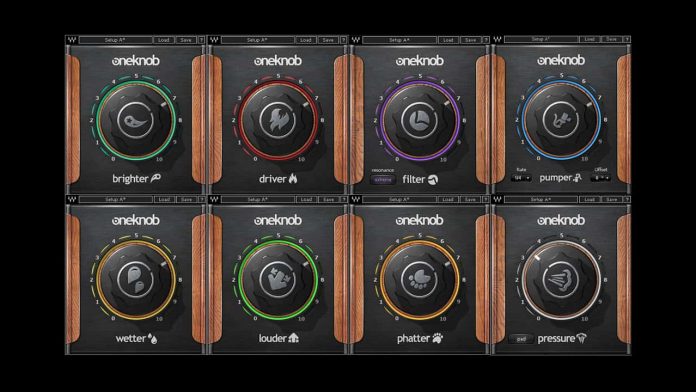 “Simplicity is the ultimate sophistication” -Leonardo da Vinci
OK with that quoted by Waves, here’s my take:
“A simple plug-in bundle deserves a simple review”

Today we’re gonna look into the Waves One Knob Series Plug-ins. I’m gonna be honest about this one, I was actually somewhat excited about this bundle. Sometimes I just don’t feel like trying to dial in the perfect setting with EQ and Compression and want to just get it over with. With that being said, now for the bad news, and this might upset a few loyal readers: this is NOT the plug-in bundle for that.
Let’s start with the slogan for these.

The cure for tweak fatigue.
Mixing has never been this fast—or this much fun.

Mixing with these plug-ins are about as fun as letting your friend’s wife wax your “treasure trail.” I know these plug-ins are supposed to break things down into easier to use settings, but COME ON. These things are way too one dimensional. I’m not saying they sound bad or anything because they aren’t. For the application you’re using them for, they’re just fine, but in order to get an unprocessed track in decent shape, you have to apply almost every One Knob Plug-in. That fills up almost all of your inserts right there, plus it doesn’t make it any easier that what you would normally do with just the respective type of plug-in and very basic knowledge of how to work it. The only plug-in out of this bundle I could see myself using on a semi-regular basis is the filter. The rest of these, I could do the exact same in almost the exact same amount of time with an EQ, Compressor, or distortion that comes standard in Pro Tools. Now why would I pay $320.00 for something I basically already have? I could see these plug-ins being worth maybe $99.00 for the bundle, $120.00 at the most but $320.00???? I just can’t waste cash like that and if you can, more power to you.

The crazy thing about all of this is the solution to this “lazy or quick mixing” need I have is a product Waves already put out that will do the EXACT same thing (and a million times more) as One Knob, in ONE interface, and it’s only $80.00 more: The Waves CLA Artist Collection Plug-ins. This plug-in has saved me both time and headache on many occasions. When I have a client in the studio who is low on funds, or is in a hurry to get a mix, I simply apply each track with the appropriate CLA plug-in (ie: CLA Bass, Guitar, Drums, Vocals, Effects) to the appropriate track and viola, ready for mastering. The great part about this bundle is how detailed each of the plug-ins are tailored to the application they’re made for. Each plug-in has compression, eq, effects all right there in one window WITH easy to understand variations of the effect or tweaking being used. You can even opt to turn off any of the settings and just use what you need. If the track doesn’t need reverb, just click at the top of reverb until it’s off. That simple. It’s like having a whole mixer full of One Knobs in one window.

“But Bryan, there’s no way you can One Knob a plug-in for drums. Each piece is too diverse.” Don’t you think someone like Chris Lord Alge knows that? He even knows the amount of hairs on your head… wait wrong diety. The CLA drums has a knob for kick, snare, toms, overheads, and room mics with each appropriate setting. So all you do is turn the knob to the type of track, and there the settings are. Also the CLA guitars have an option for amp emulation set to some of Chris’ own settings.

I can already heat the naysayers out here ready to argue. You have every right in the world to disagree but before you try to debate me on this. Just listen to the samples below. What I’ve done is take the exact same track and load it with all the One Knob Plug-ins I would need to equal ONE CLA plug-in. Let’s see which one sounds better then lets fight!

Oh wait what’s that I hear in the track with the CLA plug-in… Is that??? yep… delay. Do you have a One Knob plug-in for delay? I think not. Also, that “Brighter” knob doesn’t seem to be doing it much for the track and I had it at 75%.

So the choice is yours. Neither of them sound bad at all, but if simplicity is what you’re looking for, you might want to look to one of the “Artist Series” plug-ins, namely the CLA Bundle.