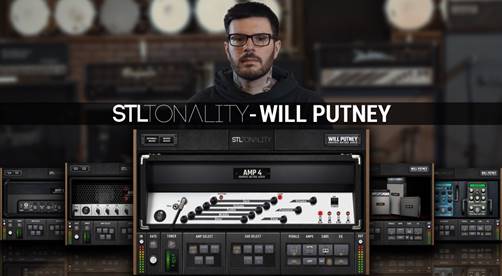 STL Tones, the leading commercial seller of Kemper Profiles has expanded its offerings with the launch of the STL Tonality Will Putney Plug-In Suite, the 2nd in the ongoing STL Tonality series of Plug-Ins.

The incredibly well-crafted guitar tones from producer and mixer Will Putney have powered a string of successful releases from bands such as Every Time I Die, The Amity Affliction, The Acacia Strain, Body Count, Thy Art Is Murder, Northlane, Gojira, Silent Planet, After the Burial, For Today, Stray From The Path, Counterparts and many others.  Putney has been a fixture in the studio world for over a decade. Working out of his Graphic Nature Audio (a recording studio based in Belleville, NJ), Putney and his talented staff of engineers have brought unique and inspired production to a vast array of projects.

In making the announcement, Sonny Truelove, STL Founder and CEO states:  “It was a pleasure to work alongside Will to create what I believe will become a staple in the heavy music scene for plug-ins. Putney’s guitar and bass tones are well respected in the music community and I am certain that people will get a lot of use out of this amazing new product.”

Adds Putney: “I’ve been an amp guy my entire music producing career, the software guitar emulations have never come close to capturing what we can create with the physical hardware at the studio. But we’ve finally cracked the code, and the recreation of my signal chains in the Will Putney STL Tonality guitar plug-in suite is truly spot on to my tones. The dynamics, depth, and reactivity of the amplifiers, cabinets, pedals, mixer, and equalizer are on a new level, the software engineering is a work of art.  I’m proud to be part of such a high quality creative tool for all guitar playing, recording, and mixing applications.”

The Will Putney Guitar Amp Plug-In Suite, with exclusive presets crafted by Putney, and other artists who have worked in the studio with Putney, is available for purchase on May 3rd at a special introductory price of $149.00.

The STL Tonality Will Putney Guitar Suite Plugin is compatible with all major 32- and 64-bit audio hosts, on both Mac and Windows. For audio and video demos, please visit https://www.stltones.com.