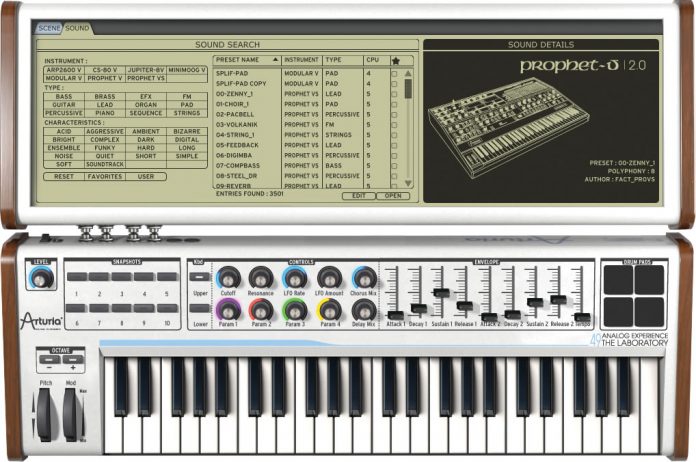 I’ve been waiting to do this review for a while to give Arturia ample time to get this program on the road. There are several bugs in the system that can be a bit tricky to work with.
I’ve owned Analog Factory for a while now so when Analog Laboratory came out, I had high hopes. I’m using this program as a virtual instrument in Pro Tools 9 so this review mainly focuses on it as a plug-in and not the stand-alone version BUT from what I’ve used on the stand alone version, it is extremely stable with the exception of the noise in the preset changing which I will address later in the review.
This program is $249.00, which you would think for that price you would be getting a better quality, stable virtual instrument; but alas as a plug-in, it performs sub-par at times. Changing presets is like playing Russian Roulette with your ears because you never know what horrible pops, clicks, or just god-awful noises you will get at preset changes. I pray you’re not using headphones unless you like that ringing sound that soon follows high SPL blunt force trauma.
And that’s really a shame because the presets are quite remarkable. You can find almost any preset for ANY style of music. They fit perfectly in the mix with very very little to no external processing. They’ve somehow found a way to perfectly emulate the classic analog synths and to add to the vintage feel while still masterfully integrating into modern day applications. The only issue is that the behavior of the vintage synths have found their way into the plug-in by constantly crashing, but with a new program, this is to be expected. I just wish the crashes didn’t completely kill my entire Pro Tools session.
The graphical part of the interface is very sleek looking, a very good match to its hardware counterpart. One of my favorite things about the interface is they have the presets categorized by type but the icing on the cake is that they even go as far to describe the feel of the presets by category. That makes life a great deal easier to find the right sound to find that one preset to fit the type of song you’re playing. I use this feature constantly. The performance presets with sequenced patterns have an issue however. The latest update has quasi-fixed most of the rhythmic patches but they’re still really glitchy. For example, say your Pro Tools session is set at 80 bpm and have the LFO Sync checked, most of the presets will match the rhythm but they won’t really sound like the original. Plus when you try to manually change the rhythm to match the tempo, nothing happens. So you basically have to build a song around the tempo they have set or the preset changes so drastically, it doesn’t sound like the original. For instance, the rhythm will cut as much as half on the pattern when you simply match the LFO sync even if the rhythm is a few BPM off. Also, as far as I’ve seen from messing with it and running through the preferences, there’s no way to alter the step sequences. The controls on the front end control parameters to a certain extent but I would like to see a more in depth preset editor to shape the sound and not just the filters, delay, sustain, etc…
The great parts of this soft-synth really add to the sting of having to deal with the headache of trying to use it without it obliterating your Pro Tools session. Also, if you do need help with the program, it might take some time for some issues but they do try to do everything to help with issues. I’ve just about become personal friends with ole Antoine at Arturia. Well the first part was due to the fact that I was too cheap and lazy to get a Steinberg key to store my authorizations with Analog Factory… That brings me to another point… make sure and buy a Steinberg key if you need to use it on multiple computers. The authorizing is very simple but if a hardware changes in your computer, you will have to request a new code.
Now would I recommend Analog Laboratory? … Hmm well its worth every penny when it works, but having such a great program at your fingertips and it not working almost makes it worse than not knowing about it at all sometimes. The standalone part of the software seem extremely stable when in the time I’ve used it with a USB Controller, but it really doesn’t seem to play nice with my DAW. Hopefully in the future, we can get a version that plays nice. As of now, they’ve released version 1.2.
In summary, this program is glitchy, annoying, and makes me cry at times but I can’t stop using it. This is my “Go To” synth for every session. The presets are that good but don’t just take my word for it, click HERE to get a 15 day trial.