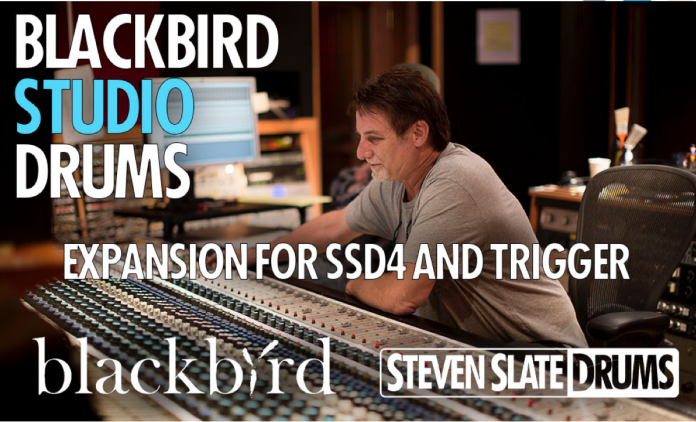 The legendary Blackbird Studios has been the studio of choice for the industry’s greatest artists, from Pearl Jam to Bruce Springsteen. With eight rooms consisting of the world’s most coveted gear and musical instruments as well as fourteen hundred microphones, Blackbird has quickly become known as one of the most prestigious recording facilities in the world.
In the Spring of 2014, Blackbird Founder John McBride recorded the Blackbird Drums Expansion with drummer Chris Tyrell of Lady Antebellum for the STEVEN SLATE DRUMS 4 Virtual Instrument and TRIGGER drum replacer plugin. Utilizing three of Blackbird’s classic rooms including the chambers of rooms A and D, tons of vintage mics and gear, classic drum kits from an era spanning fifty years, and of course, John’s amazing engineering talent, Blackbird Drums is one of the most amazing drum libraries you’ll ever experience. From vintage to modern and everything in between, Slate Drums users will savor the sounds of:
Six New Kick Drum Samples
Ten New Snare Samples
Seven New Sets of Toms
Two New Hi Hats
One New Ride
Four New Crashes
Rooms A, C, and D were used.