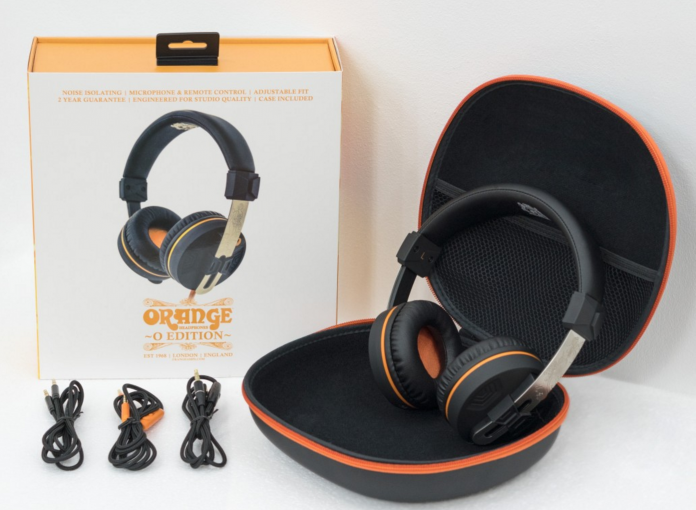 Headphone companies are springing up daily. It seems every celebrity is photographed with some bright colored beacon proudly affixed on their heads. Even companies who have no affiliation with audio are making brands. It’s all too much. Why can’t it just be easier? Well it can. Simply choose a company with a track record of knowing what sounds good and who has a history to prove it. Could it be a company who makes guitar and bass amps? Maybe… Let’s find out.

Orange has made a power play at the headphone game similarly to the Marshall company (who took matters even farther by making fridges?) and have developed a set of headphones. These headphones are made of a combination of durable ABS plastic, stainless steel, and a closed ear shape. In a refreshing left turn from the masses, Orange has kept the design to a minimal. The O Edition headphones have slight accents of orange with the company’s crest engraved into the headband. The flat black ear pieces with the Orange “O” stand out just enough without blinding people on a subway (ahem… Beats).

O Edition features 40mm drivers that Orange claim “have been engineered for a tight and rhythmic bass response and an articulate top end. A purposefully neutral EQ response makes for an open and revealing sound stage with detailed layers of separation in the mid-range”. The headphones also come with a pretty big, somewhat hard zipper case with 3 different gold plated cables: one simple cable, one with volume control, and the other with a mic. The headphones are fairly lightweight without feeling too cheap as well.

Let’s start with the looks. I actually found the headphones to be refreshingly understated – not too much going on, but not looking bland. This could seem like a bit of a departure from a company whose amps can easily be seen from the back row of an amphitheater, but even upon even looking closer at the front panel of an AD30, a lot of detail and design comes into play. These headphones are very similar – from far away they will catch a glance but once they’re in a person’s hand, a lot of intricate detail can be seen.

There are a lot of extras as well with the case and extra cables. Each cable had a slightly different look, and even though most people would settle for just one cable with everything on it, I liked having the choice of  cables. In most cases, I do not use a mic on a set of over the ear headphones anyways so the volume control stayed on most of the time. This also supplies spare cables because we all have dropped the phone or bent a plug during air guitar sessions right?!

The sound quality was a breath of fresh air. I look for even overall frequency response which isn’t much of a trend these days. Usually, companies end up with overhyped highs, too much bass, and scooped mids. Not the O Edition. Music sounds like it was intended to by the engineer. The frequency response is very open and natural but not dull. One could almost mix off of them. The headphone design also allows for great sound isolation. I was surprised by how much noise they blocked. Friends were essentially yelling at me in the office and I had no clue. That’s probably for the better… Who knows what they were calling me.

There was only one issue I experienced with the headphones. I love the look, I absolutely love the sound quality, the price is still lower than most headphones with equal quality, BUT personally I couldn’t keep them on long. The ear pieces are slightly too small to fit my ears in. I know what you’re thinking: “you must have huge ears.” Maybe I do, but these ear pieces seem to be just ever so slightly too small for my ears, which really was a shame because they sound so great. If the design would have been modeled where the padding didn’t cup your ears but rather set flat on the ears similar to the smaller Beats series, these headphones would have been the absolute perfect set of phones on the market. Don’t get me wrong, I played through the slight discomfort and still listened. I just wish they were either slightly bigger, or not cupped design. One other issue one may face is trying to purchase them. Not many stores carry them yet and the ones who do are sold out, but I feel very soon this will be fixed with a wider release.

Overall Orange has completely dominated the headphones game with the O Edition headphones. Coming in at $195.00 usd, the cost per quality ratio is on their side. They sound excellent in all genres of music and look great as well. Now only if they can make a set of earbuds too… hint hint.
For more information, visit https://orangeamps.com/orange-headphones/