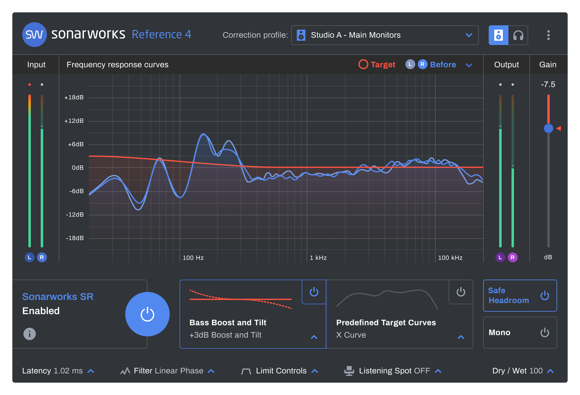 Sonarworks is a must-have for professionals on the go and users demanding the very best from their headphones and rooms (Review HERE). Last month Sonarworks announced version 4.3 and today they announce more headphone profiles.

The Latvia-based audio technology company Sonarworks has released the latest update to their award-winning software, Reference 4. Dedicated to improving the experience for both current and new users, the update includes a reworked filter mode as well as usability, latency and on-boarding improvements to allow greater ease of use with the software.

Following the complete revamp of the Systemwide app, the update now includes on-demand headphone profile downloads, which makes for a quicker set-up time and also allows users to download profiles for their individually measured headphones directly into the software. The UI on both macOS and Windows can now be switched to dark mode, a long-requested feature from the night-owls of the Sonarworks community.

Latvian audio software developers Sonarworks have just announced the addition of 17 new supported headphone models for their best-in-class audio calibration software Reference 4. The addition of these new models — which include headphones from existing supported manufacturers such as Sony, Sennheiser, and JBL as well as new additions from House of Marley, Taotronics, and Brainwavz — bring the total count of supported headphones up to 247, a number which Sonarworks says will continue to increase. The new supported models come in both wired and wireless configurations as well as a variety of price points, making Reference 4 more accessible to engineers on-the-go than ever before.

“One of the great strengths of Reference is that it allows engineers to work in any circumstance and trust what they hear, whether they are using monitors or headphones,” explains Sonarworks Co-Founder Martins Popelis. “By continuously adding new headphone profiles, we’re able to accommodate more of our users and ensure that all of them are getting the same Studio Reference sound that has become essential to their workflow.”

The new supported headphone models are: