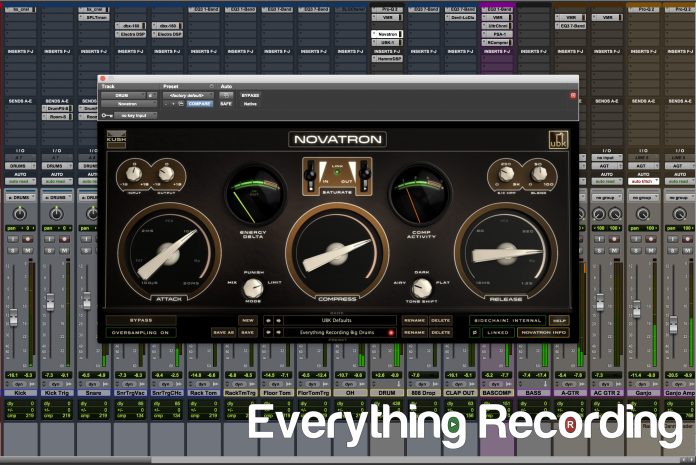 Novatron Rundown
5 / 5 Reviewer
Buy: $149 Plugin | $9.99 Subscription
Pros
- Replaces many plugins on tracks
- As versatile as it is vibey
Cons
No cons really only things I feels would make it more versatile
- Would like to see the two saturation circuits swappable from input and output
- Would like to see full range of different styles (VCA, FET, Tube) attack and release times.
Summary
This plugin should have been named "Replaceatron" with how many plugins on a track chain this will replace. This is definitely the Swiss-Army compressors to end all compressors.
Rating

The UBK-1 is a mainstay plugin since its introduction into the digital world. Countless professionals and bedroom engineers rely on this Swiss Army compressor for more than just a tool to tame dynamics. This plugin changed the way many thought of a compressor plugin by incorporating multiple stages of compression with individual mix controls all in one interface. UBK-1 inspired movement in mixes, not just a way to level the dynamic playing field. Now, Kush have released Novatron, a compressor that claims to have the versatility of three different types of compressors elegantly blended into one plugin. Can this plugin live up to the legend its predecessor plugin exudes? Let’s take a look and see


Like almost every plugin Kush and Sly-Fi founder Gregory Scott (UBK) creates, this one was born out of personal necessity. While mixing his latest album, Mr. Scott found himself at different stages of the mix patching in different hardware compressors and as the mix evolved, swapping units to accommodate different tastes. As we all know, this can be a bit of a pain, and the enemy of creativity is an obtrusive workflow. This led UBK on a crusade to create a plugin that seamlessly can incorporate almost any given characteristic of his favorite hardware compressors in one interface. Novatron is the result of this quest. By obsessively studying the first 100 microseconds of a hardware compressor’s response to transients and adding saturation at particular stages of compression, this plugin has the potential to retain that “magic” that at one point only hardware could obtain. So what sets this plugin apart from every other manufacturer that makes this bold claim?

Let’s start with the interface. Kush know how to make a plugin look great. Instead of trying to look like familiar vintage gear, Kush stick to looking like themselves. Controls are laid out like the dash of a classic car with tasteful retro-futuristic gauges and knobs. We all know looks mean nothing when it comes to mixing but credit should be given where credit is due. Seeing as I have a tendency to err on the side of OCD at times, the interface is symmetrical and makes me want to use it.

Controls are laid out in logical order in a way that doesn’t warrant much thinking when adjusting controls. At the top left we have the input and output stage, with the output controlling the level after all processing has been applied and the input controlling the level coming into the detector circuit. The input is a great global control for Novatron in that it can be used to further fine tune dialed in compression settings. Following along the top of the GUI is the Energy Delta meter which has superimposed the input signal (green) with the output (yellow). By having both meters in one spot makes A/B comparisons between original and processed a breeze. In the top middle resides the saturate, which not only allows for coloration on the input but also on the output, thus further altering how Novatron behaves with incoming audio. Controls can be set either independently or linked by pressing the Link LED. Linking the transformers will lock their position relation and allow for both to be increased or decreased simultaneously. We can all speculate and conject whether this is the same saturation from Axis or a certain Transformer but rest assured THEY ARE NOT. On top of that, the input transformer is not the same as the output. The input is based on a more odd harmonic aggressive steel design whereas the output is a warmer even harmonics nickel. These transformers don’t just make things a little more warm or aggressive, these can be pushed into all out distortion and can take this plugin from compression tool to full on effect tool.

Continuing on is the Comp activity which veers slightly off from the Kush manifesto and displays numbers?! I almost feel like there should be an option to click the gauge to disable the numbers but that’s just because we’re in new territory with Kush. I appreciate seeing this slight divergence as it shows compromise and growth from a developer and that is important especially in this industry. Take heed with the Comp activity though, this is very much based on a classic VU meter and displays RMS and not PPM. It tends to be a more honest, slower meter, which is more useful for imparting “vibe” to a track. On the far right hand side resides the detector side-chain and mix knobs. What sets this side-chain apart from others is that this one goes all the way up to 3kHz, making Novatron a perfect tool for taming harshness while preserving the low end of a mix. This filter also works in conjunction with the external side-chain switch to push dynamics into the effect category.

The big three knobs prominently displayed in Novatron are the heart of the plugin. While on the surface, these knobs look like a basic attack, compress and release, they are far from typical. Sure, Attack will adjust had quick the compressor reacts but is much more. This knob seamlessly blends attack and “grab” characteristics from three different types of compressors: FET, VCA, and Variable-Mu. UBK determined that each type of compressor had a sound he personally wanted at each stage, which imparted specific qualities that he liked. The faster attack times are handled by the FET circuit, the medium attack times are handled by the VCA, and the slower times are controlled by the Variable-Mu circuit. The Release knob functions similarly with the same circuits handling the specific times. The result of this is two knobs that do all of the heavy lifting behind the scenes and work like no other plugin does. Instead of having to place three different compressors on a track and fiddle between each one to impart the best of each type, Novatron does this in three knobs. The Compression knob couples a predetermined threshold value to an auto gain control by which more compression is achieved by simply turning the knob clockwise. UBK says the sweet spot of this control is between 9 and 3 o’clock to hit the compression stage optimally.

Finally, the two small bottom knobs are actually some of the more interesting in Novatron. These knobs are referred to as the “Attitude” knobs as they control much of overall feel of the entire compressor. The Mode rotary switch toggles between three different compressor states, each of which has its own ratio, knee, release taper, and harmonic character. The Mix mode is the subtler of the three and incorporates a low ratio and soft knee. Punish does, well, what the name states and crushes the signal, making this mode perfect for running in parallel via the mix knob. Limit has a 6:1 medium knee, perfect for adding gravity to a mix without over-compressing the signal. The Tone Shift knob adds two more pre and post compression emphasis circuits which impact audio at its detection stage and once it’s out. Dark will roll off highs without losing too much treble and Airy throws a little sheen on the signal. Of course, if transparent is what you are after, Flat will bypass this circuit completely. Across the bottom of the interface is where the bypass, oversampling, sidechain, presets, and polarity reside. The linked button is actually a hidden gem of this plugin. Unlinking a stereo track will allow the compressor to behave like a “multiple mono” track would in Pro Tools whereby each side responds to gain reduction separately. While this can sometimes be helpful, it can lead to a very unbalance track if used incorrectly. Still, when used properly, can add a lot more perceived spread to the stereo field.

So there you have it… Novatron – one of the first plugins I’ve seen that somehow took three different compressors and made them “under-complicated” in operation. How does it compare to its older brother, the UBK-1. That’s actually a tough comparison. The two are ideal for different situations. Is Novatron as good as the UBK-1 at what it does, ABSOLUTELY. I really hate reviews where I don’t really have anything to complain about because it seems like I’m doting like a fan boy about a specific brand. I do have one or two things I would like to have on the plugin just out of morbid curiosity but I really don’t have any criticisms. Just because this plugin is so versatile, I would like to see the option of swapping positions of the input and output transformers JUST to see how it changes the compression. The same goes with the attacks and releases. I’d like to have the entire span of attack and release of the FET, VCA, and Vari-MU with maybe a three-way knob to control between the three of them on each control, but I have a feeling that either this would have been a DSP and coding nightmare or that these stages will show their faces in future plugins. Either way, these comments are from someone who doesn’t code and in NO way changes how great this plugin is.

I almost have to be refrained on my praise to be more convincing of how great this plugin is but can’t help it. The Energy Delta makes level matching a breeze, the controls are simple, and more importantly, the sound that comes out of this plugin. Novatron somehow takes the weight of a track and pushes it forward in a mix and we all know how difficult low end is to properly “place” in a mix. This has just done it for you. I almost feel guilty using it, it’s that good. It does more than just compression masterfully. Novatron took three plugins out of my drum bus right off the bat. On my mix bus, I had a very similar preset on a certain “Bus Compressor Rack” plugin that destroyed CPU, get “destroyed” by Novatron. They should have named it the “ReplaceATron” just due to how many plugins it leaves “bypassed” in its wake.

Does it sound like real analog hardware? WHO CARES! I’m not touching the plugin analog debate, nor do I even care about that debate. All I know is this plugin does what rows of different plugins do in one interface. Guitar busses love the saturation with a little VCA attack and MU release. Drums instantly pop their head out of a buried mix without being overpowering. How does this thing work?! To quote the movie Joe Dirt, “How does a rainbow work? How does a posi-trac rear end on a Plymouth work? It just does.”

And lastly and just as importantly, go listen to UBKHappyFuntimeHour.